Actor Terry Crews was praised by his fans for canceling an interview he had scheduled with Toure after the journalist recently admitted to sexually harassing a makeup artist.

The interview was scheduled to take place in Brooklyn, N.Y., on Thursday, Jan. 10, and Touré took to Twitter to promote it. However, he sent out the tweet on the same day a makeup artist named Dani revealed that he used to sexually harass her while they worked at the “People/Entertainment Weekly” show in 2017.

But Crews quickly retweeted the promotional message and wrote “Cancelled” just two minutes before the show was supposed to go live. 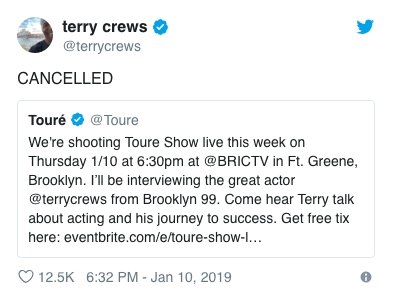 While Crews gave no explanation as to why the interview was canceled. Many suspect the actor was showing his support to Toure’s accuser due to his support of the #MeToo movement after revealing that he is a victim of a sexual assault from a 2016 incident with agent Adam Venit.

The makeup artist Dani gave Essence explicit details of the type of harassment she faced during her time working with Touré. The makeup artist eventually reported him to human resources, and he was fired and later apologized to Dani through a text message. But once she saw him criticize R. Kelly in the “Surviving R. Kelly” docu-series, she decided to tell her story.

Touré has since issued a statement to Essence acknowledging the “crass” conversation he had with Dani and apologized for the incident.

Some of Terry’s fans have applauded him for canceling the interview scheduled with Toure and staying true to his stance against sexual harassment in the workplace.

“We applaud you Terry for knowing where you stand, which is away from the mess,” someone wrote.

“Way to stand on your principles,” wrote another.

Press play below for more on this story.